Get yours! All about breast augmentation 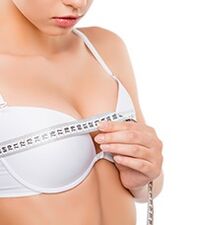 The history of mammoplasty (breast augmentation) dates back to the 19th century. As soon as women began to remove corsets, there were attempts to somehow influence the shape and size of the mammary glands.

First, liquid paraffin was injected into the tissues, then they tried to enlarge the breasts using the most incredible materials: glass balls, ivory, cartilage, wool. The consequences of such experiments had nothing to do with health and beauty. It should be noted that the surgeon who tried to enlarge the breasts with the help of the patient's own fat came closest to solving the problem. Later, this idea will be developed. But then the result was not fixed, since the adipose tissue was absorbed rather quickly.

In the second half of the twentieth century, the invention of silicone gave a new impetus to plastic surgery. Liquid silicone gel was injected directly into the breast area. Complications of such operations were not long in coming: inflammation, granulation, neoplasms. Often, women had to agree to complete breast removal in order to save their lives.

In 1961-1964, the predecessors of modern implants were developed, which were silicone sacs filled with a specific gel or saline solution. They began to be placed under the gland or under the muscle. However, reports that their use can cause cancer, temporarily postponed their triumphant march. In 2006, the implants were rehabilitated.

Now it is no longer accepted to hide the fact that women resort to the services of plastic surgeons and improve their appearance. Some stars don't even mind creating an additional news feed to remind about themselves. Among those who decided on breast augmentation with implants and did not regret it are Kate Hudson, Jennifer Lopez, Christina Aguilera.

Should you be afraid?

Of course, any surgical interventions at first cause us concern. For those who are afraid of surgery, but want to increase the size of their breasts, they offer all kinds of miracle creams, ointments containing phytoestrogens, hormonal therapy, special physical exercises, and injectable preparations (fillers). It must be understood that such procedures will not give the desired result. In short, creams and ointments simply cannot penetrate biological barriers, and the concentration of active substances in them is small; exercise can increase the pectoral muscle, but not the size of the gland, and fillers based on hyaluronic acid act only on the skin and subcutaneous layers, and then only at a young age.

If you've really decided that breast augmentation will help you not only look, but also feel much better, just find a clinic and a plastic surgeon you can trust. Believe me, the specialist will not persuade you to have an operation if there is no special need for it. They will listen to you, examine you, select the optimal shape and size of your breasts, and use computer modeling to show you how your figure will look after mammoplasty. In addition, they will warn about the consequences, contraindications and possible complications so that you can consciously make a final decision.

When breast augmentation is warranted

The main reasons for breast augmentation include:

However, often the indication for mammoplasty is one thing - a woman's desire to increase the size and improve the shape of her breasts.

A specialist may refuse an operation if:

In order for the enlarged breasts to look as natural as possible, and the patients do not worry if the plastic is noticeable, various versions of silicone implants and methods of their installation have been developed.

The requirements for modern implants (endoprostheses) are quite strict. They should be highly durable, if possible, have an anatomical shape and not cause severe complications (capsule formation, rejection, displacement).

Depending on the characteristics of the figure, skin condition, individual preferences, the doctor can offer a choice of silicone implants, which differ in:

Variations in the location of the endoprosthesis are also possible:

In addition to the installation method, the type of access is selected, that is, the place where the surgical incision will be:

Before surgery, the patient must undergo an examination, which includes blood and urine tests, clinical and biochemical tests, tests for coagulation, HIV and syphilis, ECG, fluorography and mammography. Only after that the operation is scheduled. Two weeks before the operation, blood thinners are canceled, smoking and alcohol are prohibited, as they have a bad effect on wound healing. Before the intervention, regardless of the type of anesthesia, the patient does not eat or drink for 8 hours.

The operation is performed under general or local anesthesia. First, the so-called implant pocket is prepared, the fitting is performed and then the final installation. If the filling is saline, the silicone sheath is inserted first and then the implant is filled with fluid.

After that, drainages are introduced to drain blood and other liquid contents from the operating area and a special compression garment is put on, fixing the breast in the desired position.

If you need a slight correction of the décolleté area, then breast augmentation is possible without installing implants. This is lipofilling. A certain amount of fat is taken from places with developed adipose tissue, filtered and injected into the chest area. On the one hand, this method combines 2 surgeries to shape the figure at once: liposuction and mammoplasty, so it may be most suitable for some patients. On the other hand, after a while the fat is absorbed and the procedure will need to be repeated.

It can also be used in combination with augmentation mammoplasty, if it is necessary to smooth the area of the implant location.

After discharge from the clinic (usually on the second day), dressings are performed, the scars are sealed with a plaster, and painkillers are administered if necessary. The stitches are removed after a week.

The patients wear compression underwear for at least one to two months, and at this time they can only sleep on their backs. Up to 3 months heavy physical activity, thermal procedures, swimming pool are contraindicated.

The final result of the operation can be assessed only after six months. Modern implants allow you to live a full life without hesitation. The only thing you have to part with is jumping from a height. It is better to plan a pregnancy no earlier than a year after the operation. You also need to monitor the weight and condition of the skin. Sudden fluctuations in body weight can lead to sagging breasts.

Otherwise, you can enjoy a beautiful bust and attention of the opposite sex. Now the improvement of one's own body occurs without harm to health.

So weigh the pros and cons, consult with an experienced specialist and boldly go to your dream.