WHAT YOU NEED TO KNOW ABOUT BREAST INCREASE

For breast augmentation, a plastic surgeon places implants filled with special silicone, saline or biocomposite material, breast implants under the pectoralis major muscle or under the breast tissue. Modern implants can serve a patient's entire life, and most manufacturers give their implants a lifetime warranty.

Why would a woman need to enlarge her breasts?

Breast augmentation is done for:

In 2007, a study by researchers at the University of Florida found that breast augmentation through aesthetic surgery increased women's self-esteem and their feelings and sexuality. Allows you to get a higher-paying job, achieve more recognition.

What are breast implants?

A breast implant is a medical device that is placed under the mammary gland or under the pectoralis major muscle to enlarge, reconstruct, or create an aesthetic breast shape.

Breast implants may contain silicone, saline, or other compound.

There are three main types of breast implants:

What needs to be decided before surgery?

Breast augmentation is a surgical procedure, therefore patients need to carefully consider whether they really need this procedure.

The following options are possible:

The choice of incision depends on several factors, including the magnification, the patient's anatomy, the type of implant, and the surgeon-patient's preference.

How is the operation going?

After the patient plunges into a medical sleep, or after performing local anesthesia, the surgeon makes a skin incision in the place, according to the type of access agreed with the patient, about 4. 5 centimeters long, and then, using special tools, forms a pocket, into whichan endoprosthesis is placed.

The pocket can be formed either directly under the breast tissue or under the large breast muscle (this is discussed with the patient before surgery):

In their practice, plastic surgeons often use the so-called cosmetic, or, more correctly, intradermal sutures, usually several rows of threads are applied, which most often do not need to be removed, over time they dissolve on their own. In addition, a plastic surgeon can use a special surgical glue and special sterile strips to tighten the edges of the wound so that the scar is least noticeable in the postoperative period.

The cut lines will be visible at first, but over time they will almost disappear.

Surgery may lead to edema, hematomas (bruising), but this should go away within two to four weeks. Usually, the final result is formed no earlier than 3-6 months from the operation. Therefore, the patient will be able to decide whether the procedure meets her expectations only after some time.

The recovery period takes 1 month. During this period, there are certain restrictions that will be told to the patient by the doctor and a special memo will be issued for their exact implementation. Pain worries the patient only the first day after the operation, for the purpose of pain relief, non-steroidal anti-inflammatory drugs are used. In rare cases, narcotic analgesics. Then the pain practically goes away. A slight inconvenience remains. After the operation, you should not swim in open and closed waters, take a bath, sleep on your back, raise your arms high, engage in active sports and hard physical work. All these restrictions are temporary, for 1 month. Then the patient can live peacefully as she lived before the operation, you can fly on an airplane and dive with scuba diving. The most important thing in the postoperative period is wearing special compression underwear. The underwear must be strictly worn for 1 month after the operation, and then for another 3 months when playing sports, heavy physical activity.

The next day after the operation, the patient can leave the clinic if she wishes. The patient is monitored once a week, in the first two weeks, then after a month. Then three months later. And then an annual check-up.

Absorbable (absorbable) threads usually dissolve within 6 weeks. The patient will take care of the seam independently at home. This is not difficult at all.

If the patient has non-absorbable sutures, an additional visit will be required to remove them.

After the operation, the surgeon will not only tell you how to behave in the postoperative period, but also provide you with an extract with recommendations, where it will be written:

You should seek immediate medical attention if you experience:

What are the risks of this operation? 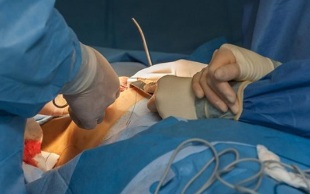 Any surgery increases the risk of sudden death from myocardial infarction, stroke, thromboembolism during or immediately after surgery. But, fortunately, such complications are extremely rare. And in modern clinics there is all the resuscitation and anesthetic equipment that minimizes these risks to almost zero.

Some of the risks and complications associated with breast augmentation:

A specific complication of this operation is capsular contracture - a thick capsule is formed around the implant. Which can deform the mammary gland or make it extremely painful and dense. During the consultation, the surgeon will tell you in detail about this complication and how to avoid it.

Also, even cosmetic stitches can become red, thick and painful, or flat and wide. This can lead to a second operation to remove such scars.